The first companion app that lets rideshare drivers know exactly where to be to pick up premium rides and maximize profits while on the clock. 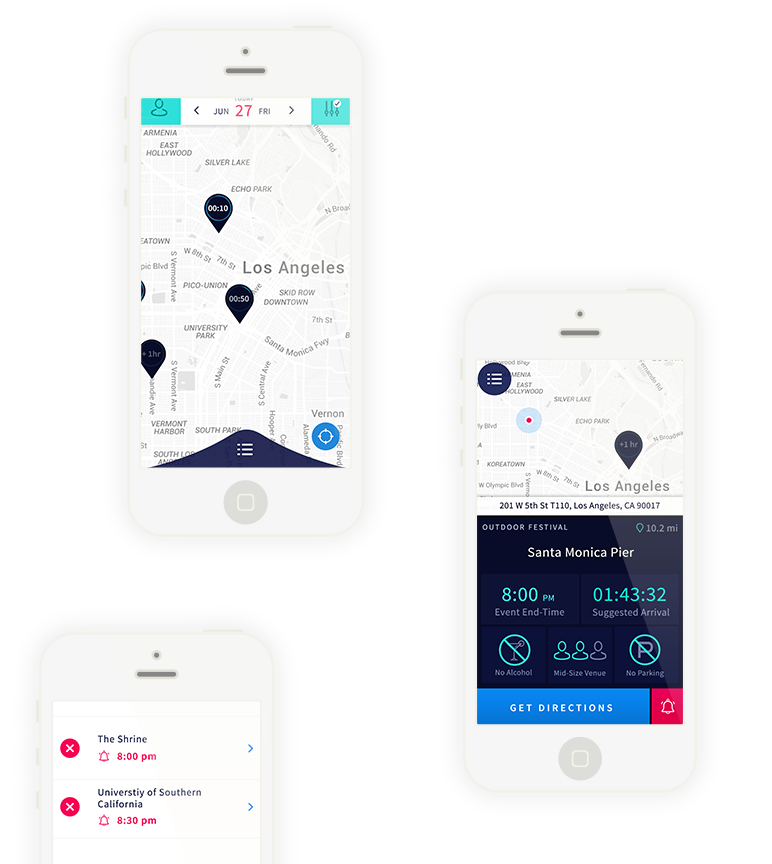 I often ask my Uber drivers what part of town they're from because it always amazes me how far away they end up driving from their home town in one night. In a town like Los Angeles, where traffic is notorious in certain areas and going 12 miles can take 2 hours, I was always curious about their experience and sympathized that the unpredictability must be a little frustrating. This curiosity and interest in a potential pain point helped lead to the idea for Front Cab.

Specifically, one night, my co-founder/husband and I we're heading to a baseball game when our Uber driver asked about our destination and, immediately after realizing it was a big event, inquired what time the event would let out. We realized that for him, returning to that area as the event ended meant guaranteed ride requests and maybe even a surge price bonus. We asked him a few questions about driving for Uber and realized beyond the occasional "Taylor Swift is playing tonight" email, there weren't any resources to help drivers understand what time events would be over - only the ability to search when they would start.

After doing our own research and asking driver after driver if they'd be interested in an app that would give drivers event end-times, we realized two things:

B) 100% of our drivers said they would pay for such a service.

Front Cab would offer end-times of all of the local events in your area as well as the size of the venue, what type of event it was, if parking was available, recommended arrival times, and even if alcohol was served.

We knew having this information was extremely valuable, but only if it wasn’t available to every Uber driver out there.

Our research and customer interviews made us realize the app shouldn't promote "Surge Chasing" (best described as when drivers notice a surge happening, drive straight to the affected area to get rides, but by the time they arrive, realize the zone is already oversaturated with other like-minded drivers). If 100% drivers could access the information that Front Cab would provide, it would make for a real cluster-you-know-what. Instead, we would offer it to just 10% of drivers in each city as a monthly membership and therefore only Front Cab members would know when events were ending before surge pricing alerts went out. Essentially, membership gave drivers exclusive information and the right tools in their belt to increase their earnings. 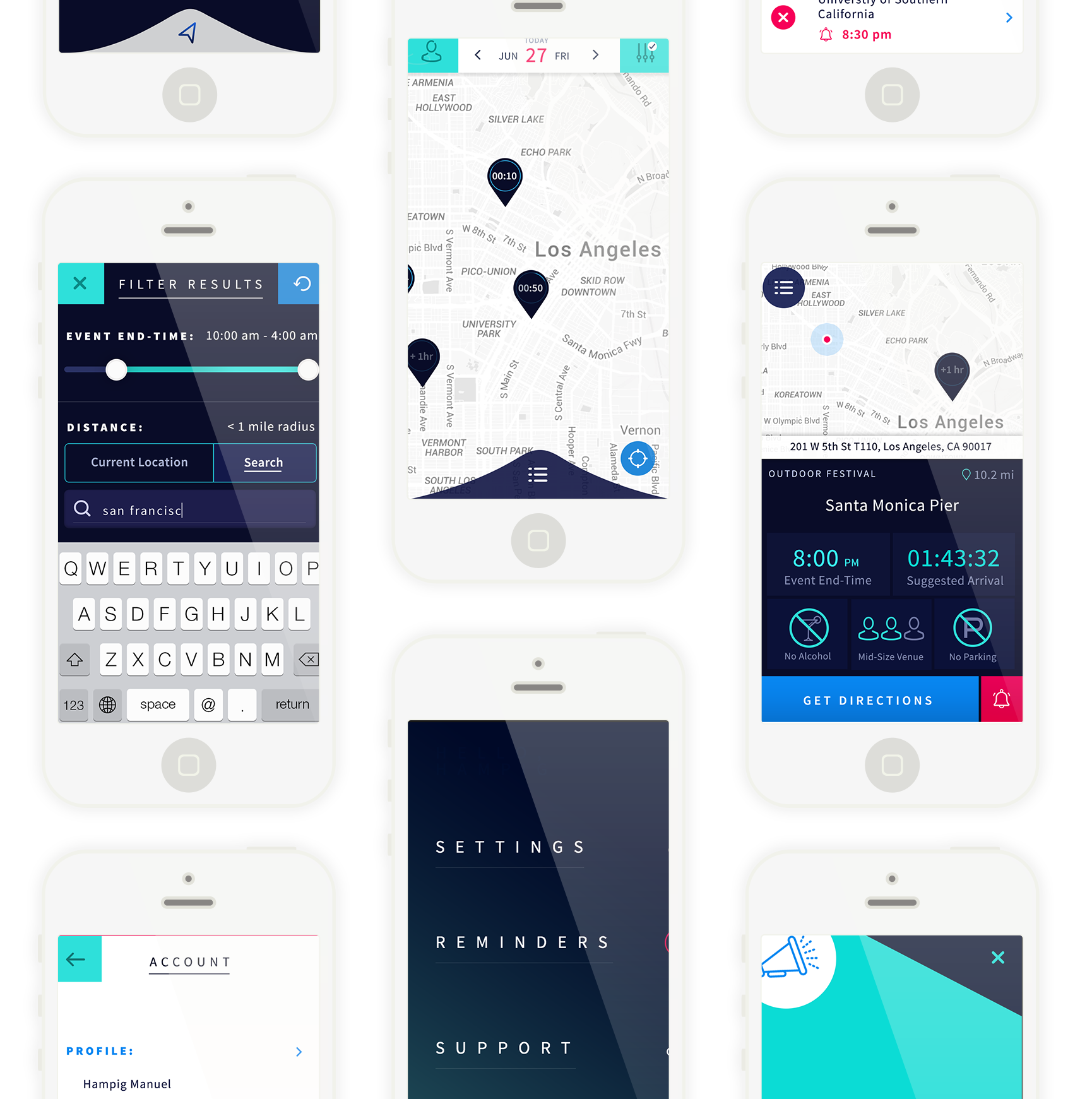 Reservation System
In tandem with defining Front Cab's branding, I designed a landing page to take reservations and show real-time results of how many reservations were still available. Because memberships were limited (and as a way to gauge interest in the app since it would be completely self-funded) we decided it would be beneficial to both parties to accept reservations before the app was finalized. As we were still fine-tuning the details of the app, I designed the landing page to focus more on the app's selling points, unique features, and the value it brings to drivers. This way, we would have flexibility with the design to continue and improve upon it.
The App
One common complaint among drivers is about the unpredictability of their ride-load upon starting a shift. They could pick up a rider in one part of the city only to drive them an hour into the boondocks without any idea of what else was around. They could also find themselves waiting around for a ride requests just killing time. One of the many benefits of Front Cab was that it allowed you to plan out your night and do so ahead of time or even on-the-go. 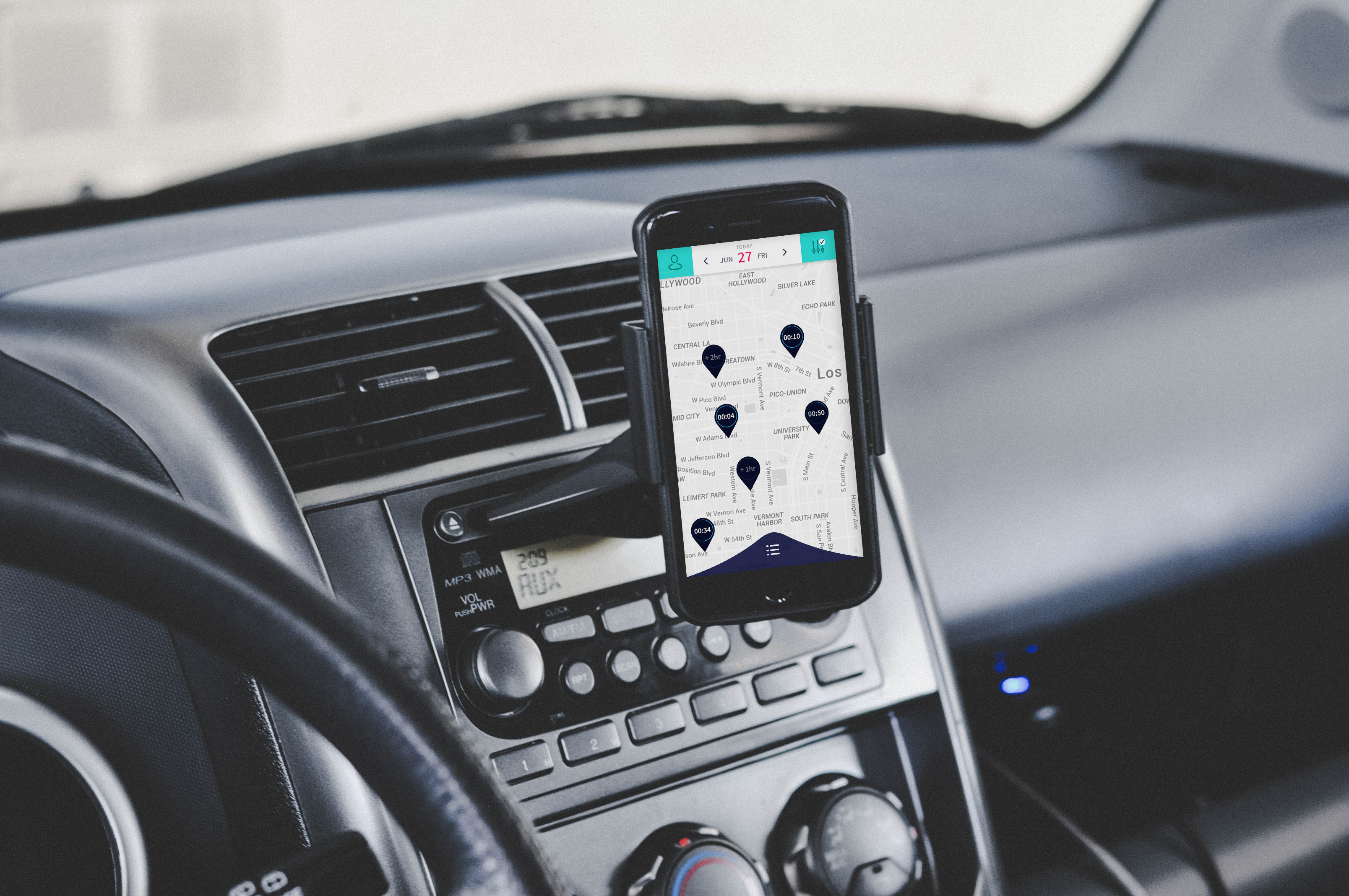 FRONT CAB'S INTERACTIVE MAP HAD EVENT PINS THAT SHOWED EVENT LOCATION, HOW LONG UNTIL AN EVENT ended, AND EVEN visually PRIORITIZED EVENTS THAT WERE ENDING SOONER

Front Cab allowed you to see what events were ending soon within a certain radius, so being a newbie to an area is never a disadvantage. Additionally, if you wanted to be in a certain part of town for a specific event, you could set an alert and Front Cab would send you a reminder plus a suggested ETA so that you could start driving with plenty of time to arrive. 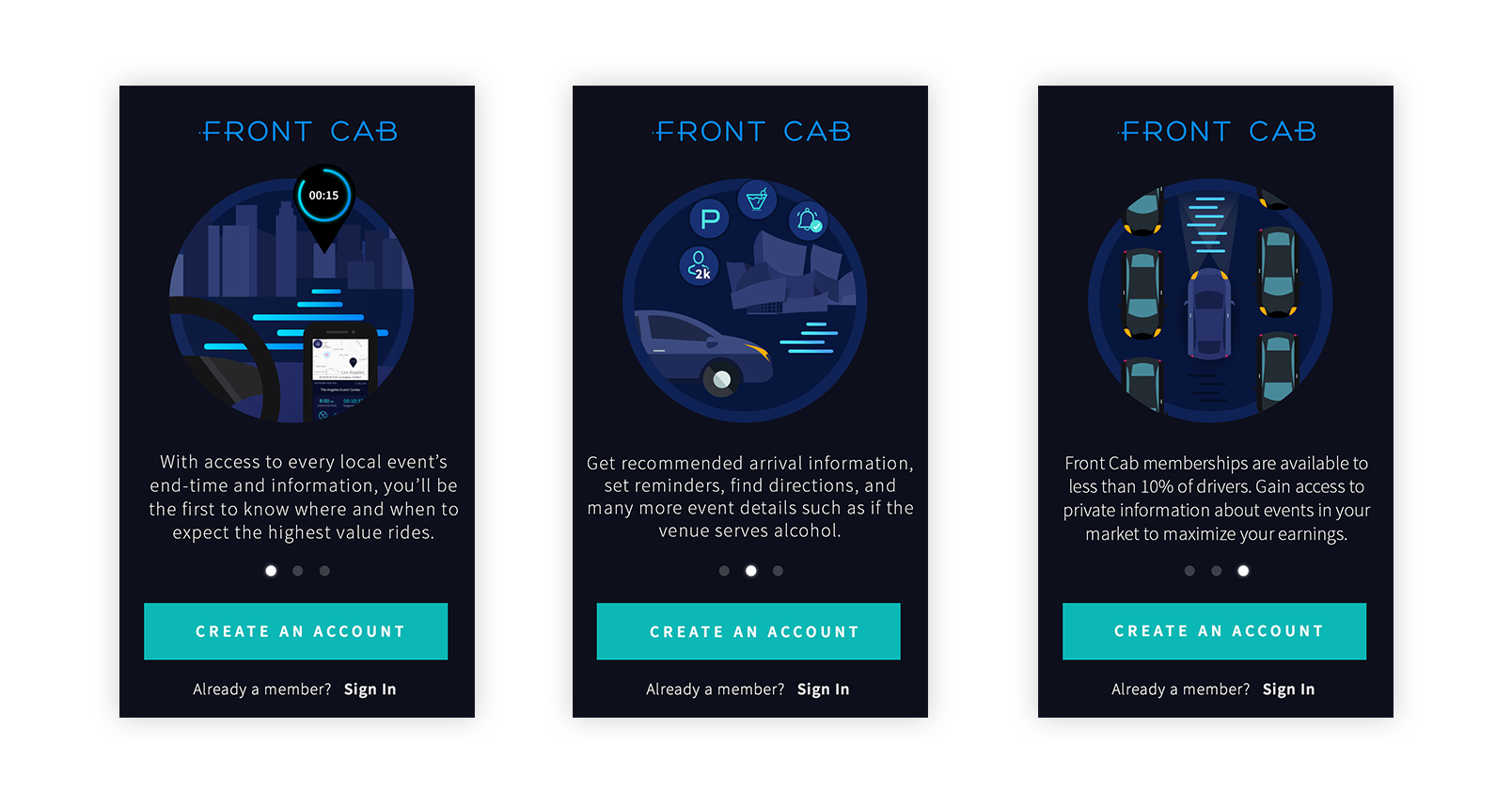 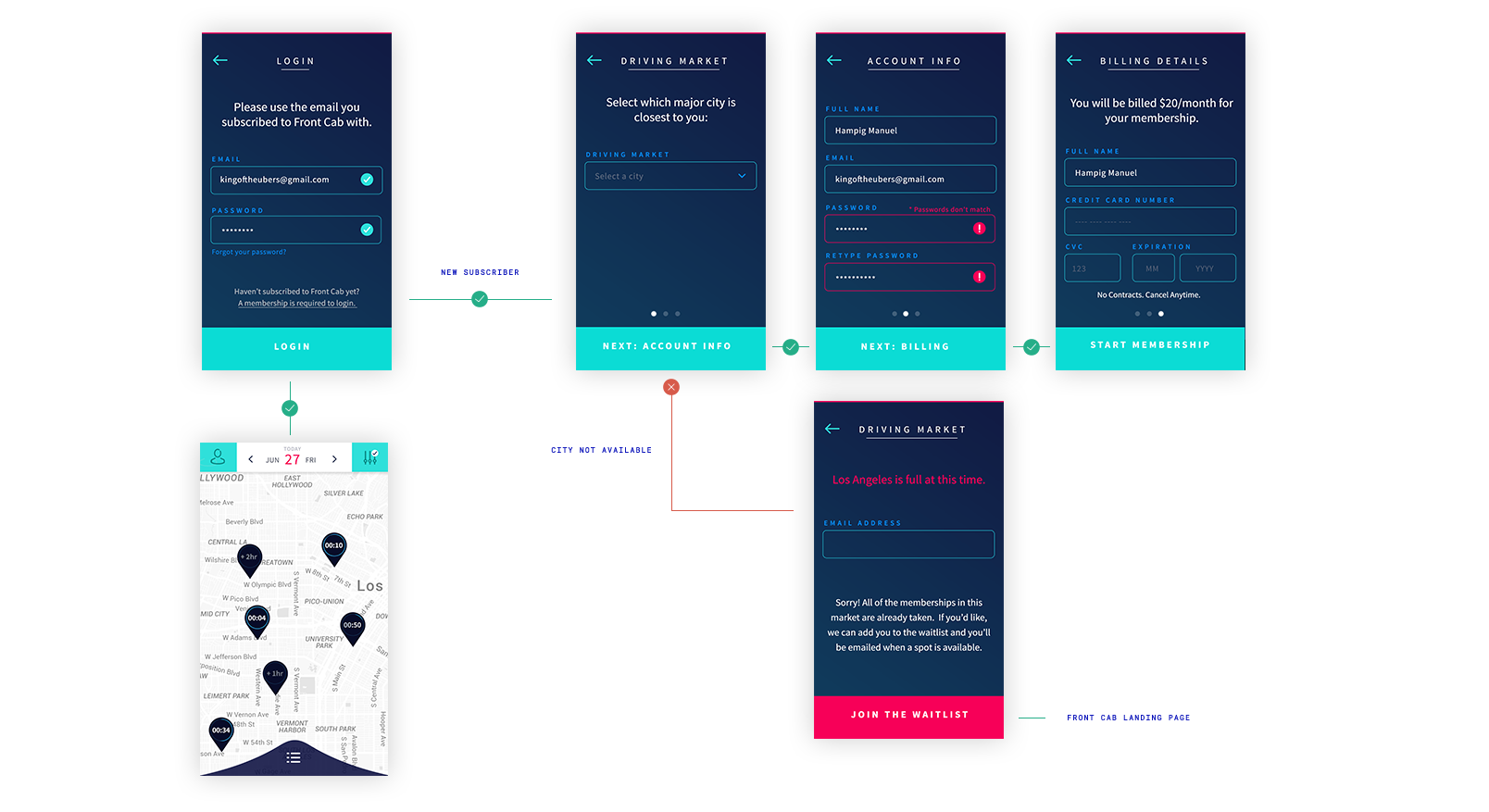 I believed that visual cues would be very important for our drivers. After considering our target user we knew many people would be using this app on-the-go, so quick, legible information and limited button-tapping were key.

+ High contrast colors and information hierarchy were all top of mind when designing for this app.

+ Custom dynamic map markers were uniquely developed with real-time countdown information so that drivers could see the map view and know right away whether an event was ending soon.

+ Bespoke icons were designed as well to make sure the app felt unique to our brand as well as help drivers quickly ascertain whether an event would be serving alcohol, whether parking was available, and how many people would likely be at this event.

Where Is Front Cab Now

Unfortunately, two weeks before launching our hybrid app, the company behind the API we contracted revealed that they didn't have as many events, end-times, or truly any of the information that they had previously promised.

We looked extensively at alternatives including how to find out that information ourselves, but ultimately realized we didn't feel comfortable putting out an app that couldn't be accurate or reliable for our customers.

We pride ourselves on integrity and couldn't put our name on something that wasn't a quality product; so, we came to the difficult decision to refund our registered customers and close the book on Front Cab. Not every story has a happy ending, but I chose to include in my portfolio because I believe firmly in the work we put into it, the design patterns, and especially the thought behind the app. Every interaction was carefully constructed to provide the best experience possible, and to me, that's what design is all about.