ACTually is a collaborative and engaging app that allows anyone to create, star in, and produce fun movie- and TV-style scenes.

The founders of ACTually have a background in the LA film scene and wanted to create an acting-based community and platform to provide fun and unexpected scripts to perform, post and collaborate on with friends. While consulting for the mobile development agency, Swenson He,  I helped identify solutions that would bring playful folks to download and repeatedly use the app. 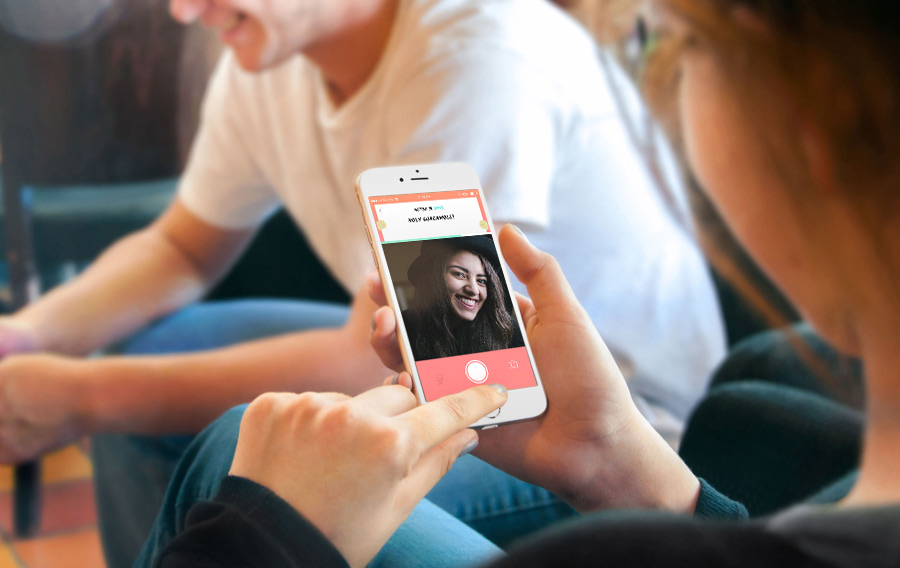 Before launching the first version of the app, we did our best to understand the different possible motivations and backgrounds users might be coming from to the app. I defined our potential users as the following:

Persona 1: Dante, 19. Loves acting, is in improv troupe, spends time watching funny YouTube influencers and would really love to climb the online “social ladder” in hopes of encouraging a professional acting career. Outside of acting commitments, he mostly enjoys being on his computer or phone and interacting via devices/platforms.
Persona 2: Amanda, 14. Loves the limelight and spending time with friends. Obsessed with Instagram and confident she and her group of friends are #squadgoals. Spends hours playing with video apps like Dubsmash and Musical.ly or really anything that adds flower crown filters and lets her crew be the stars of the show.
Persona 3: Shane, 26. Very social, likes organized activities and playing games, and enjoys entertaining others.  Friends are important but especially loves entertaining her young nieces and nephews. Keeps a mental list of new ideas to keep the fun going at next family get-together.

Empathizing with our potential users helps drive features that provide the best outcome for folks using the app.

Defining these user expectations helps me guide the UX process and prioritize components that will lead to a satisfying interaction. In addition to an ideal feature set, it further defines our target audience and aids in the process of defining an appropriate visual language.

+ As an aspiring actor, I want a tool to practice my art and share my passion with other people. It would be incredible if I could collaborate on a script with my favorite professional actors or YouTube personalities via the app.

+ As a friend-focused high schooler, I want to entertain my peers and be entertained by technology. I want to be able to post, see the likes roll in, and have an archive of hilarious content I’ve made with my social circle. Because I’m still young, the content has to make my parents feel comfortable but not so baby-proofed that I’ll be embarrassed to use it.

+ As the "hostess with the mostess," I want a interactive multi-player game that will be a hit with whomever I’m hosting. An app with a surprise twist would keep my guests engaged and laughing the whole night through. 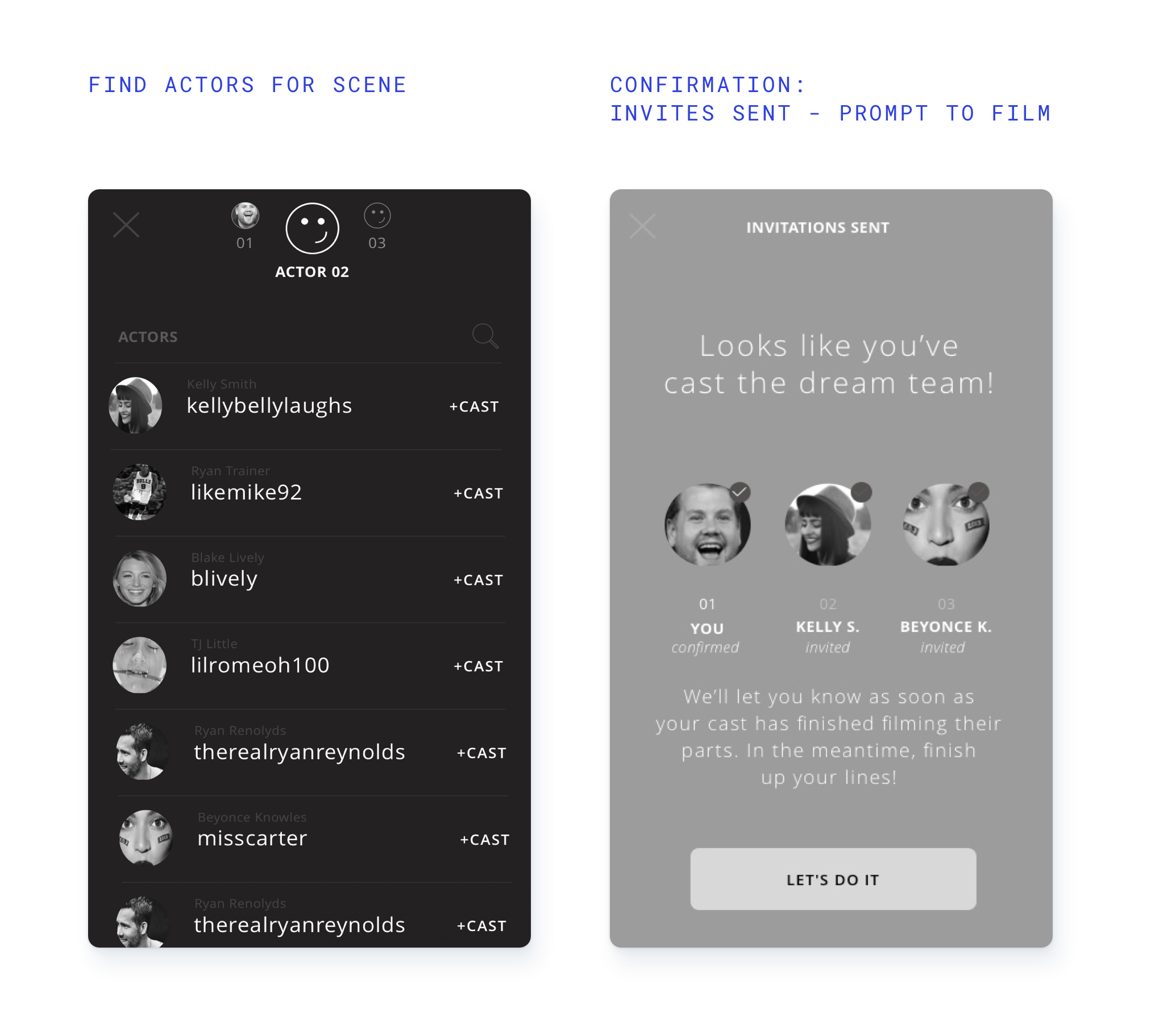 Early Wires for the Film a Scene Flow

Knowing what I knew about our target demographic, I put priority on the following features: 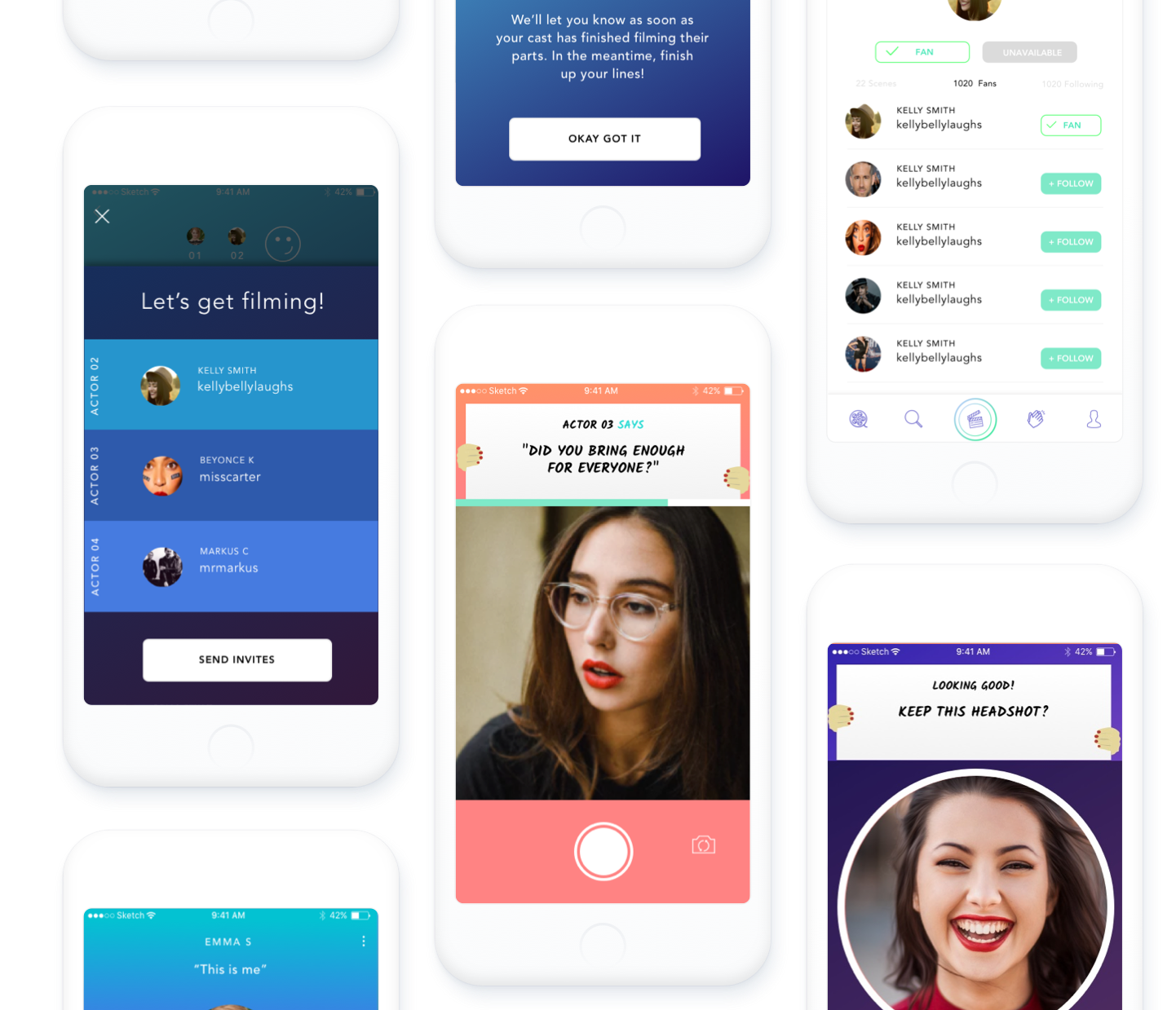 After defining the success features with the stakeholders, I broke down the app into major component sections to best evaluate and design the user flow. Each of these sections came with it's own unique challenges especially in finding a way to target a youthful audience, be enticing enough to be viral, and maintaining an undertone of authentic film-making experience.

We aimed to have three filming styles:

+ Single-cam: Follow the screen directors instructions to film your parts alone or with people who are in the room with you

+ Multi-cam: Invite a friend from anywhere to join the scene with you and film the prescribed scenes separately

+ Freestyle: Throw out the script, go rogue, you're the director now.

Each of these came with their own complexities and user flow that needed to be precisely thought out. For instance: how would we handle publishing a multi-cam scene if it were a three-person scene... and the third person took several weeks to respond to their invite? Would the other actors have to wait on this scene to be finished? No way, José. No acting should go to waste - we'd have to incorporate a reminder feature and option to recast just in case. Layered thinking and features like this helped create a frustration-free experience for everyone involved. 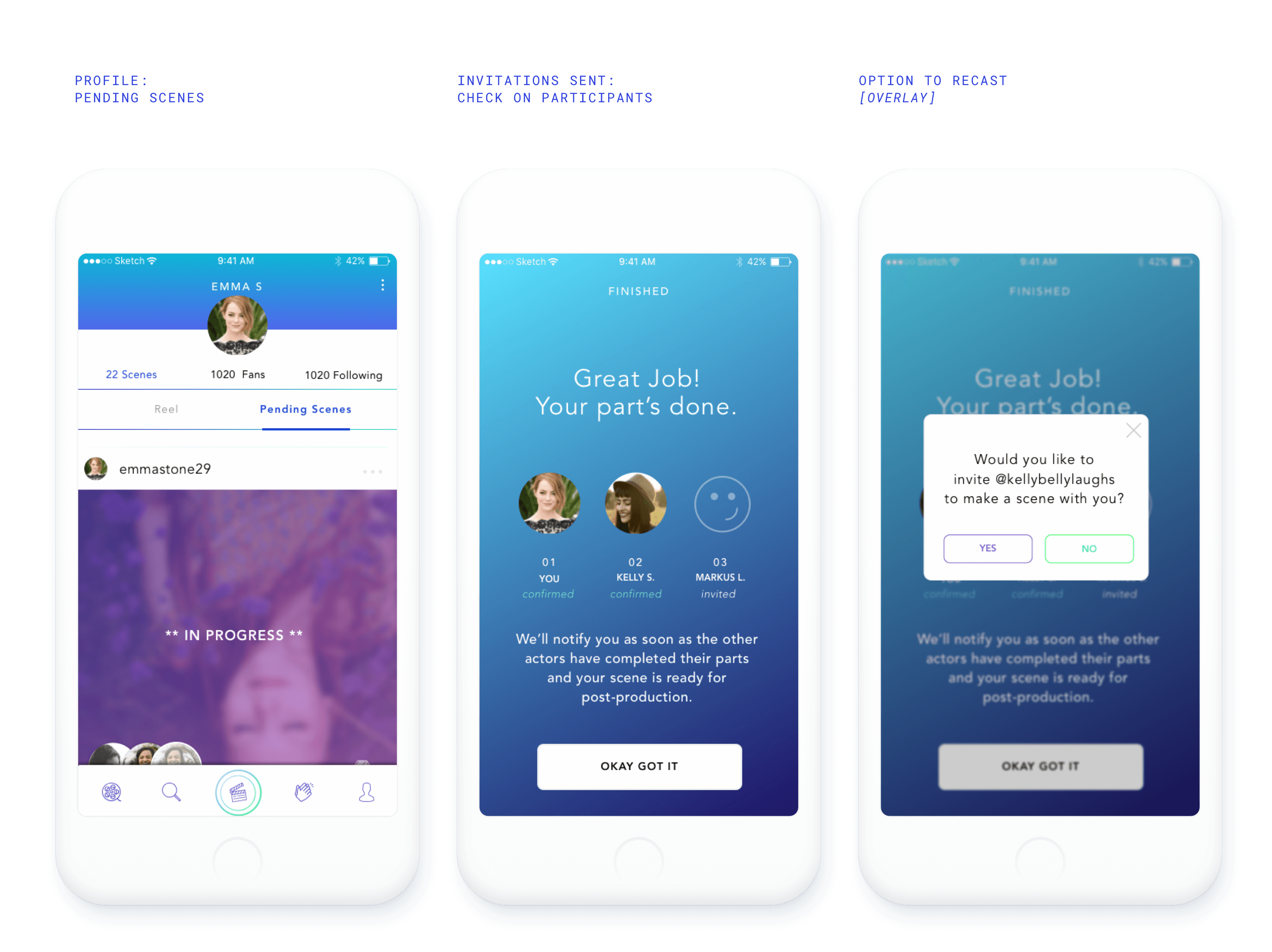 While shooting your scene, there are also a few modes to consider:

+ Filming: A director will tell you what to say and how long you have to film the line. Additionally, there are opportunities to play with augmented reality, filters, and voice warps.

+ Keep or Reshoot: An option to review the scene and either do it again or move forward to your next part

+ Post-production: The finishing touches where you add your films title and make any edits allowed for that scene

One of the more unique and unusual challenges we faced was that the client really wanted to incorporate a director to make the scene feel more like a true scene and less like a personality-less app. This proved to be more difficult than we thought because the last thing we wanted to do was create a "Clippy" experience; but also, mobile devices have limited real-estate and adding too much "flair" could inhibit the UX. Ultimately, I came up with the idea of just showing hands holding a cue-card and adding "Action!" and "Cut!" overlays to the camera feed as an unobtrusive but fun solution. This also lead to me creating a few custom illustrations and iconography for the app. 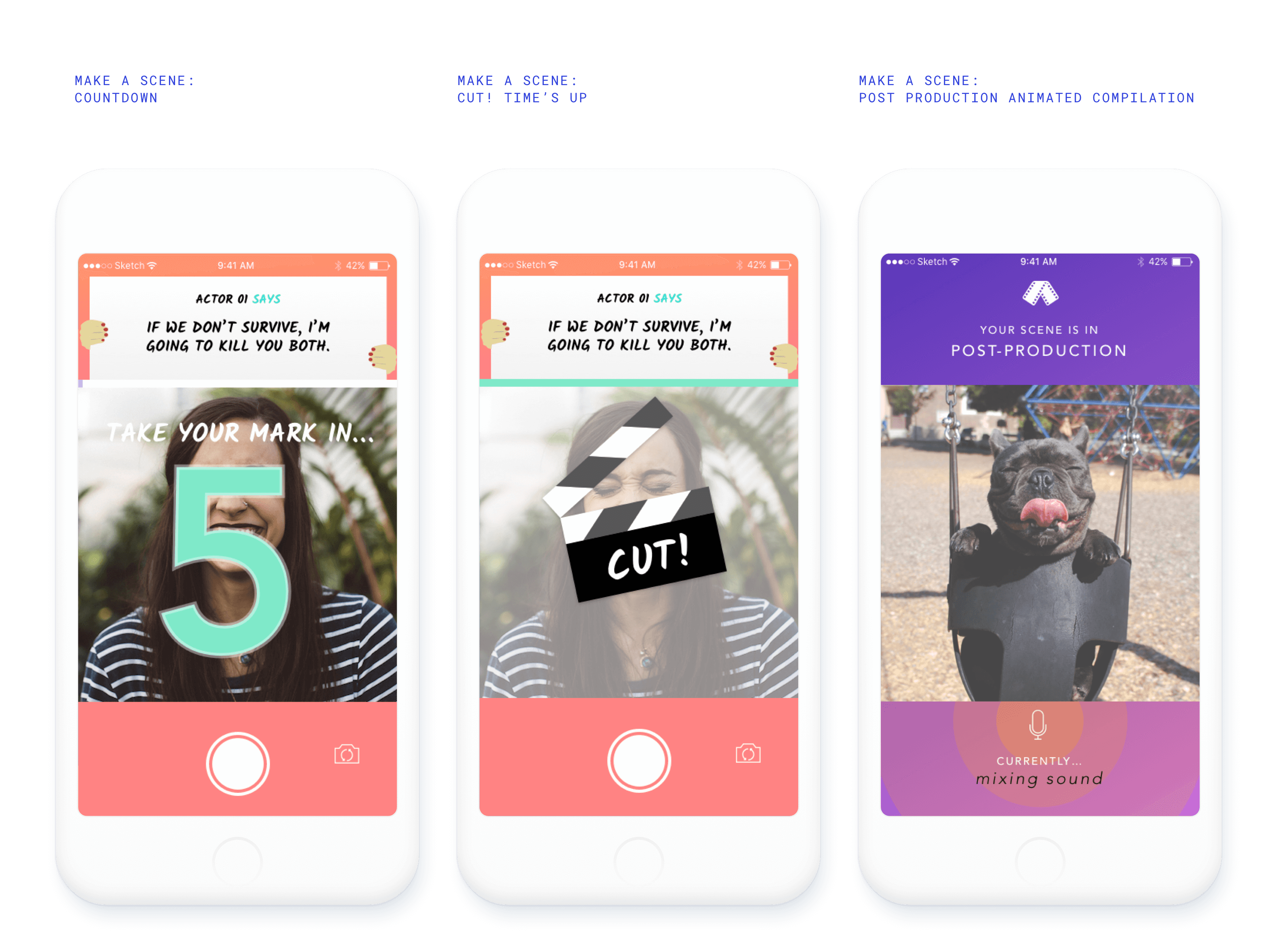 Examples of industry jargon and details throughout the filming process. All SCripts in 'ACtually' are custom content from the makers; The scripts are randomized the keep things fresh.
COmmunity

Creating a feed that was instantly familiar but also immediately incentivized public sharing and a sense of community was an important component of the app.

+ Profiles: Users had their own profile and feed where they could share their own videos, bookmark others, follow friends and also check in on their pending/unfinished scenes

+ Discovery: An important and difficult part of launching a brand new social media platform is making sure it's not a graveyard when it starts out. Adding a discovery page to highlight "A-List" actors and "Community Favorite" videos was an essential way for new users to find and inspire each other. 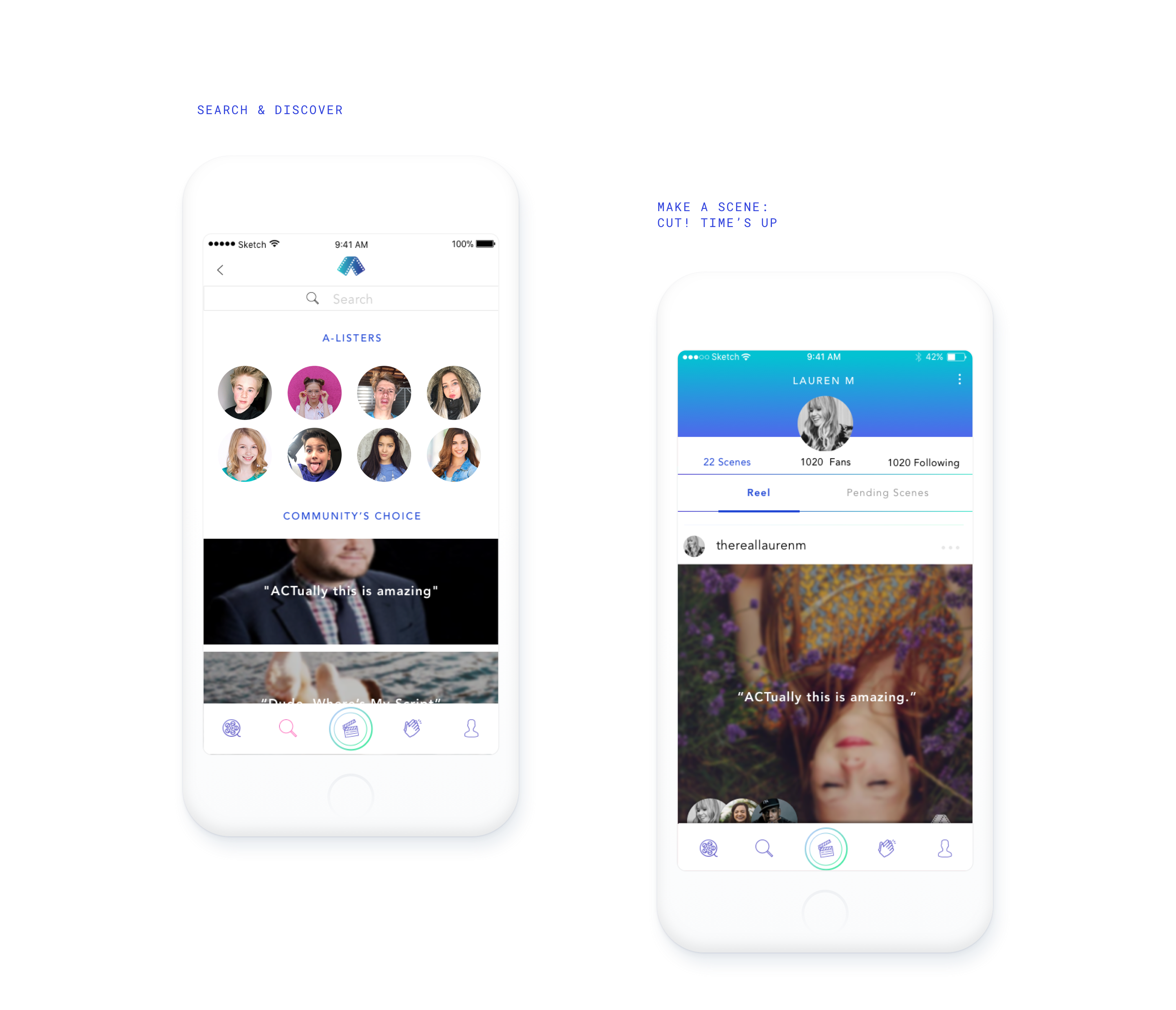 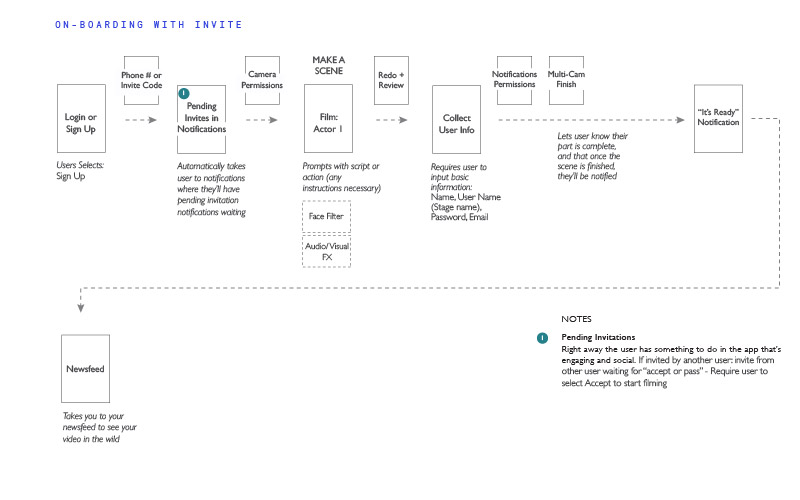 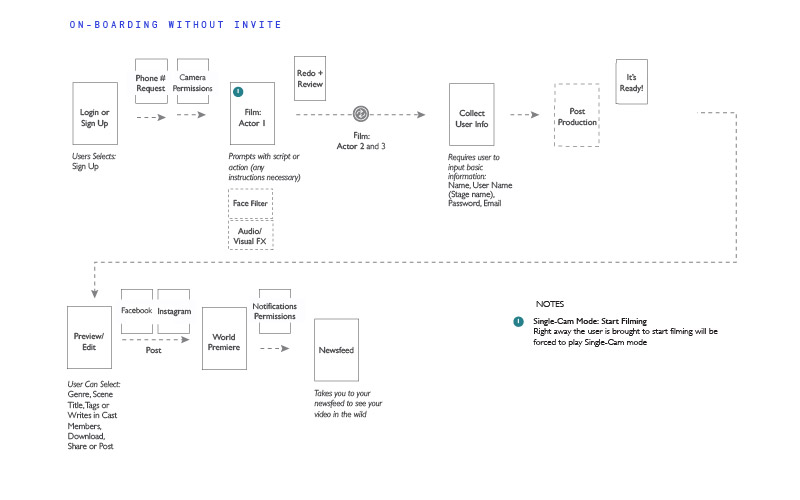 I like to come back to design the on-boarding process at the very end of designing an product. Since it's the most likely the first interaction and impression a user will encounter, I find it beneficial to return to it after spending weeks elbows deep in an app at a point when I can reflect on all the first-hand knowledge I've gained. Throughout the testing and deeper UX thinking process, I'm able to retro-actively assess what the most intuitive process will be for the user as as well as what will best serve the client's business goals.

For this app, we needed to consider a few ways the user might discover the app - likely, either through an invite to act in a scene with a friend who already has the app, or by organically downloading it for the first time with no prior knowledge of it's features. After performing a competitive analysis and quickly sketching out a few options, I determined with the team that the best route would be to throw a user into the scene making process as soon as possible. This allowed them to get a feel for how addicting and hilarious making a scene could truly be in a very non-commital way. 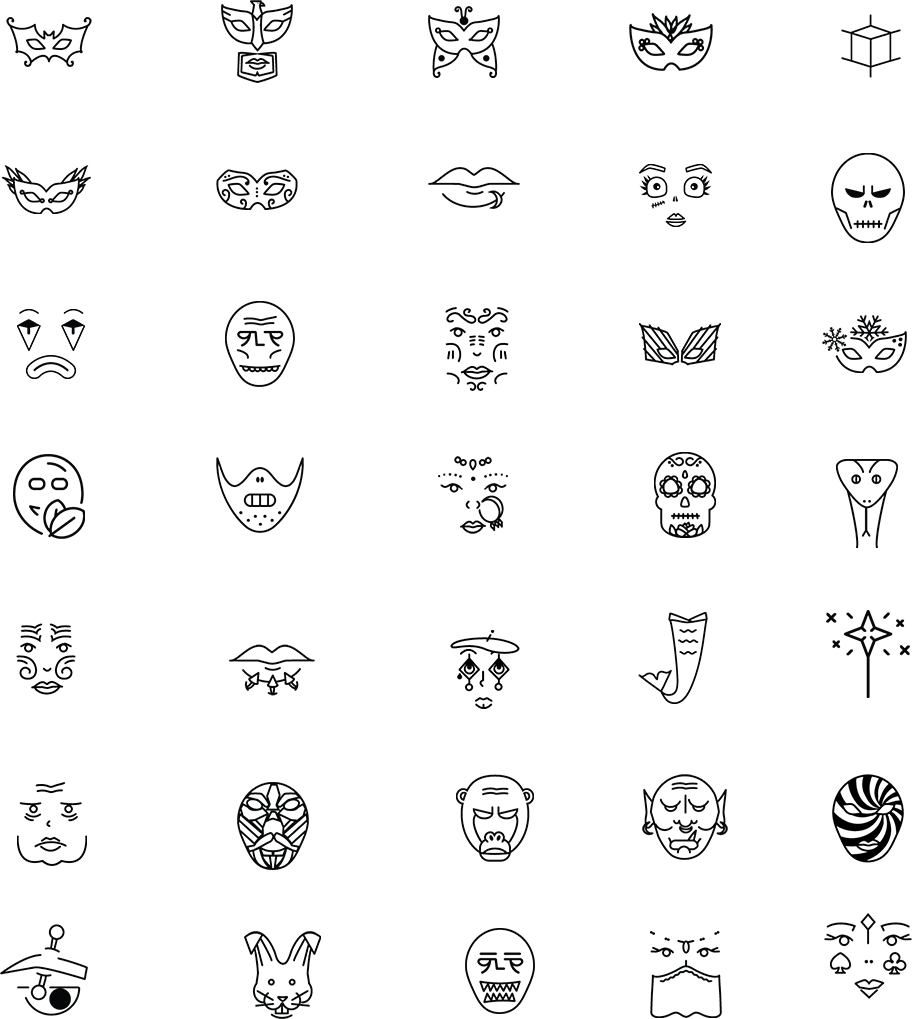 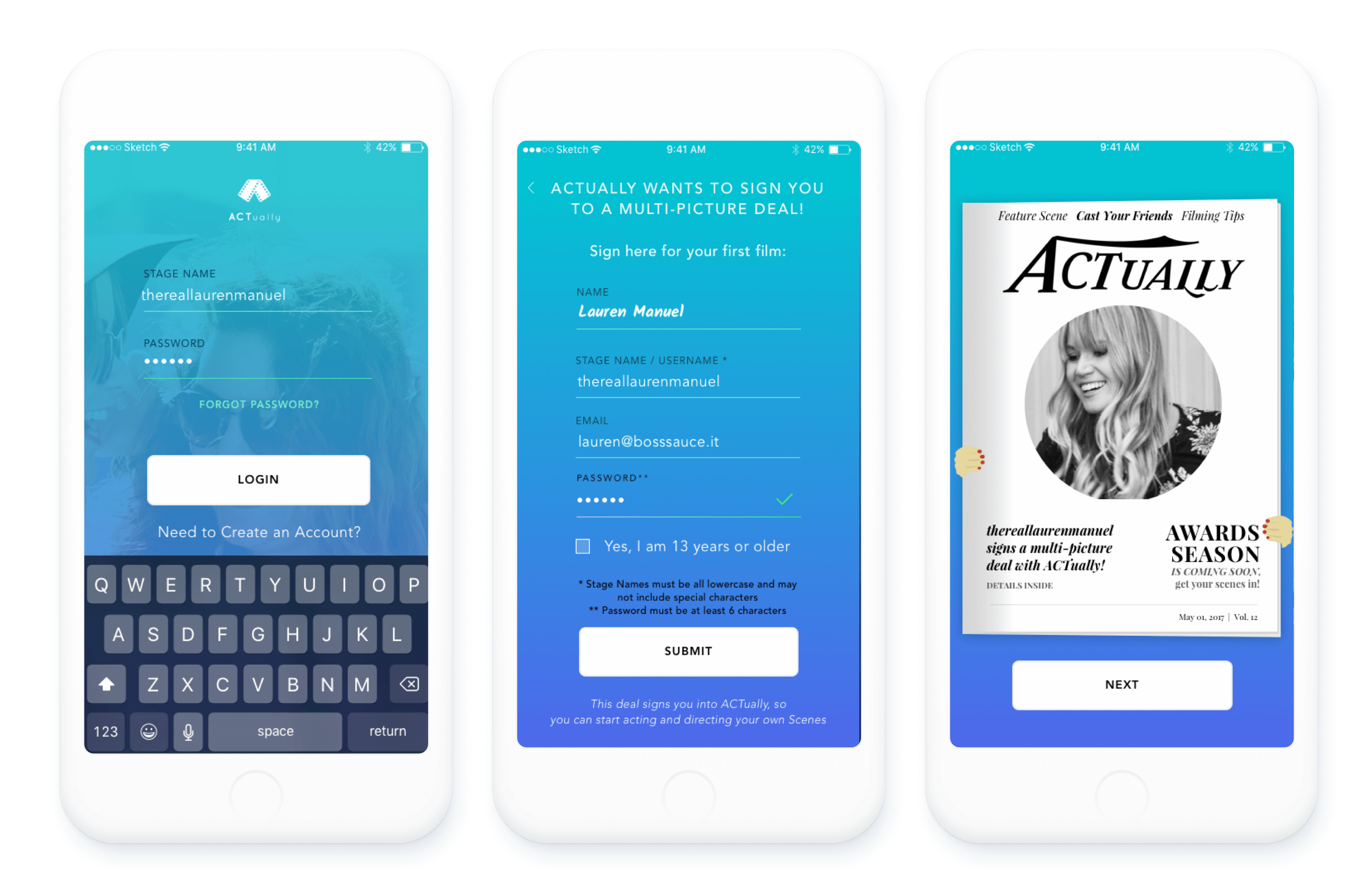 Little details like replacing a regular Sign Up form field with "Signing You to a Multi-Picture Deal," or a custom illustration that parodied Variety magazine cover helped make the boring details of an on-boarding process feel special and tie in those professional acting vibes we wanted.

The team at Swenson He did an amazing job developing this complex iOS app. And, though it's ever-changing to promote new features, the 5-star app store reaction to the product I helped launch was amazing to watch. What was best for me though, was seeing the positive reviews from people who seemed to perfectly fit our target audience and knowing we hit the mark:

"Every Thursday we have game night, which is slowly turning our kids to apps, so every night we finish with an app game. I downloaded this and the family cant get enough of it. The kids love it and we couldn't stop laughing at each other. We might just have to give this app its own day. I don't approve of a lot of technology usage for my kids, but this is playful and creative to allow them to express themselves in unique characters. Great for everyone."

"I can practice my acting on this app, nothing like this that I know of and I am tired of recording myself on my phone. If you are looking for something that is more interactive than other like apps, this is the one for you."

"The features that this app offers are what many people on other social platforms have been trying to do on their own time and with external video software. Effortlessly, you can jump right into a movie scene with professional actors and other people in the community. The variety of genres, situations and augmented reality make for a fun all around experience for yourself and friends, whether in person or through the web."

Get ACTually! for iOS 👈
← PREV CASE
NEXT CASE →
©2018 Lauren Manuel
Made by me, fueled by ice cream, at
Boss Sauce Creative, LLC